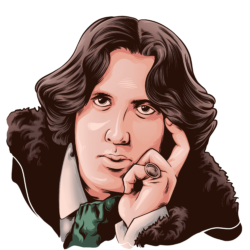 Born in Dublin, Ireland on October 16, 1854, Oscar Wilde grew up as a famous author, playwright, and poet who was known as a literary figure in late Victorian England with his wit and flamboyant style. Some of his famous works are “The Picture of Dorian Gray” and 'The Importance of Being Earnest”. After he earned his degree from Oxford University, he pursued his career as a poet lecturer, art critic, and a proponent of the principles of aestheticism.

We are all in the gutter, but some of us are looking at the stars.

A dreamer is one who can only find his way by moonlight, and his punishment is that he sees the dawn before the rest of the world.

A gentleman is one who never hurts anyone's feelings unintentionally.

A little sincerity is a dangerous thing, and a great deal of it is absolutely fatal.

A man can be happy with any woman, as long as he does not love her.

A poet can survive everything but a misprint.

A thing is not necessarily true because a man dies for it.

A work of art is the unique result of a unique temperament.

Alas, I am dying beyond my means.

All art is quite useless.

All women become like their mothers. That is their tragedy. No man does. That's his.

Always forgive your enemies - nothing annoys them so much.

Ambition is the germ from which all growth of nobleness proceeds.

Ambition is the last refuge of the failure.

America had often been discovered before Columbus, but it had always been hushed up.

America is the only country that went from barbarism to decadence without civilization in between.

An excellent man; he has no enemies; and none of his friends like him.

An idea that is not dangerous is unworthy of being called an idea at all.

Anybody can be good in the country. There are no temptations there.

Arguments are extremely vulgar, for everyone in good society holds exactly the same opinion.

Arguments are to be avoided: they are always vulgar and often convincing.