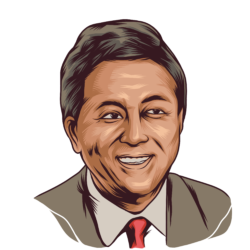 Robert Kiyosaki is a multi-talented personality, a Japanese-American businessman who founded Rich Global LLC and the Rich Dad Company. He became very popular for his series of books entitled “Rich Dad Poor Dad”. Kiyosaki earned his profession at U.S Merchant Marine Academy and graduated from the academy as a deck officer in 1969. He received the Air Medal honors when he served in the Vietnam War as a gunship pilot. After he left the Marine Corps, Kiyosaki tried his luck in business, and later founded the major brands namely Rich Dad and Cashflow.

Most people never get wealthy simply because they are not trained to recognize opportunities right in front of them.

Nice guys do not finish last. Last place is for cowards and those too full of fear to take action.

Your mentors in life are important, so choose them wisely.

The primary difference between rich people and poor people is how they handle fear.

The key to life is to be happy with or without money.

Money will never make you happy if you are an unhappy person.

Money only magnifies who you really are.

If you want to be rich the rule of thumb is to teach others how to be rich.

Fail harder. You cannot be successful without failure.

Every successful person in life began by pursuing a passion, usually against all odds.

Business and investing are team sports.

Broke is temporary, poor is eternal.

Your future is created by what you do today, not tomorrow.

When you are young, work to learn, not to earn.

Watch what the idiots are doing, and do the opposite.

Tomorrows only exist in the minds of dreamers and losers.

The world is full of smart poor people.

The poor, the unsuccessful, the unhappy, the unhealthy are the ones who use the word tomorrow the most.

The only difference between a rich person and poor person is how they use their time.

Confidence comes from discipline and training.