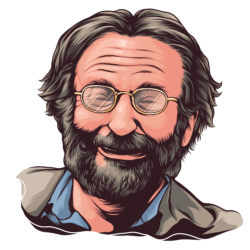 Born on July 21, 1951, in Chicago, Illinois who eventually became one of America’s talented actors and was regarded as one of the best comedians of all time. Robin Williams impressed the public with his improvisational style and best-acting performance. In his earlier career, Williams launched his own television show Mork and Mindy and later on appeared in multiple leading roles in films like "Good Will Hunting", "Dead Poets Society" and "Patch Adams". His exceptional performance in acting made him won several Golden Globe Awards as the Best Actor.

Cricket is basically baseball on valium.

The only weapon we have is the comedy.

I love kids, but they are a tough audience.

My children give me a great sense of wonder. Just to see them develop into these extraordinary human beings.

Make your life spectacular. I know I did.

Time is the best teacher, unfortunately, it kills all of its students.

I have not thought about it, but when I die, just dance on my grave and water the plants with what you are drinking. Please do not clone me, because after a while your clone is not as bright as you are.

To be free. Such a thing would be greater than all the magic and all the treasures in all the world.

All it takes is a beautiful fake smile to hide an injured soul.

The world is open for play, everything and everybody is mockable in a wonderful way.

You must strive to find your own voice because the longer you wait to begin, the less likely you are to find it at all.

If heaven exists, to know that there are laughs, that would be a great thing.

Some are born great. Some achieve greatness. Some get it as a graduation gift.

Comedy can be a cathartic way to deal with personal trauma.

Marriage is a triumph of imagination over intelligence.

Reality: What a concept!

Being a famous print journalist is like being the best-dressed woman on the radio.

I stand upon my desk to remind myself that we must constantly look at things in a different way.

The world is your oyster. Never stop trying new things.

We get to choose who we let in our weird little worlds.

The human spirit is more powerful than any drug and that is what needs to be nourished: with work, play, friendship, family. These are the things that matter.

Sometimes you can have a whole lifetime in a day and never notice that this is a beautiful as it gets.

Nobody takes a picture of something they want to forget.

I always thought the idea of education was to learn to think for yourself.

No matter what anybody tells you, words and ideas can change the world.