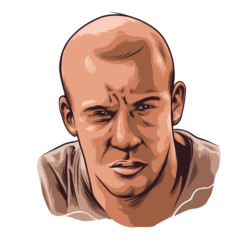 The Fast and Furious star who gave us extreme full-throttle action, breath-taking high-speed stunts, and a crazy ride experience throughout the movie. Vin Diesel earned enormous public attention with his excellent portrayal of the character Dominic Toretto. He left college and created his film Multi-Facial which was an entry at the Cannes Festival in 1995. Aside from his career-defining role in the Fast and Furious franchise, he also starred in several movies such as The Chronicles of Riddick, XXX, and The Last Witch Hunter. His cunning performance in all of his films earned him a name as one of the highest-grossing action actors of all time.

Most of my confidence came from being with ladies, because I certainly wasn't getting any acting jobs.

The man who raised me is black. Culturally, he made me who I am. He was a theatre director, so he also guided me artistically.

The idea of exploring character relations and their development over a decade has to be appealing for any actor who cherishes his craft.

The films that I do are deep, introspective, brooding roles that you're in this heavy headspace all the time.

Obviously, for me, story is first and foremost, even in the face of the attractive idea of having all the cast there, or having a great piece of talent come to it.

None of the actor methods ever discussed what it would be like to play a character on film for over a decade, and what it must be like to return to a character and imagine the time off-screen, which is interesting. There's something as an actor that I enjoy about evolving characters.

My mother gave me this book called Feature Films at Used Car Prices by a guy named Rick Schmidt. I gotta credit the guy, cuz he gave me the most practical advice. It empowers you.

My mom used to say that I became a fighter and a scrapper and a tough guy to protect who I am at my core.

My mom insisted on multigrain bread and never allowed soda in the house.

My gut feeling about sequels is that they should be premeditated: You should try to write a trilogy first or at least sketch out a trilogy if you have any faith in your film.

The most important thing in life will always be family. The people right here, right now.

I've turned down twenty something million dollars for movies.

I've been auditioning since I was 7 years old.

It's insecurity that is always chasing you and standing in the way of your dreams.

It wasn't until I went to college and I got my first motorcycle that I understood the thrill of speed.

I'm the most ambitious person you ever met.

I'm not really afraid of the dark, except if I'm walking. The thing that scares me the most is the possibility of walking into a wall and busting my lip.

When I first did 'The Fast and the Furious', I didn't want there to be a sequel on the first one. I thought, 'Why would you rush to do a sequel - just because your first film is successful?'

You live these three months in this reality, in this dark reality. You don't want to do those films every year because they're taxing. I started smoking a lot of cigarettes.

You know when something feels so good but you're afraid to feel good about it? So you kinda hold back? Everyone says, Congratulations, you must be so happy. And you say something stupid like, I'm just doing what little I can with what little I have.

You get a timeless cool card in New York.

You break her heart, I'll break your neck.