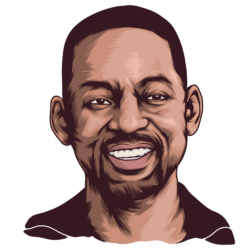 Surprisingly insightful, The Fresh Prince of Bel-Air offers some of the most down to earth and relatable advice out there. Will Smith is known for his acting career, his rap career, and as a comedian and an overall comic genius. Some of his more notable roles are Men in Black, Wild Wild West & I, Robot. Will Smith has won four Grammy Awards.

Being realistic is the quickest path to mediocrity.

Throughout life people will make you mad, disrespect you and treat you bad. Let God deal with the things they do, cause hate in your heart will consume you too.

Stop letting people who do so little for you control so much of your mind, feelings and emotions.

Life is not the amount of breaths you take, it's the moments that take your breath away.

Never lie, steal, cheat, or drink. But if you must lie, lie in the arms of the one you love. If you must steal, steal away from bad company. If you must cheat, cheat death. And if you must drink, drink in the moments that take your breath away.

The first step is you have to say that you can.

Too many people spend money they haven't earned, to buy things they don't want, to impress people they don't like.

Greatness exists in all of us.

No matter how talented you are, your talent will fail you, if you're not skilled. Skill is achieved through practice. Work hard and dedicate yourself to being better every single day.

The things that have been most valuable to me I did not learn in school.

Never underestimate the pain of a person, because in all honesty, everyone is struggling. Some people are just better at hiding it than others.

I have a great time with my life, and I wanna share it.

Your life will become better by making other lives better.

The separation of talent and skill is one of the greatest misunderstood concepts for people who are trying to excel, who have dreams, who want to do things. Talent you have naturally. Skill is only developed by hours and hours and hours of beating on your craft.

I know who I am, I know what I believe, and that's all I need to know.