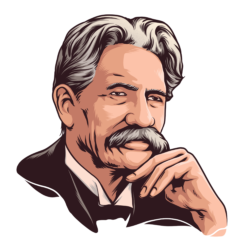 Known as the Founder of Lambaréné, this Nobel Prize recipient was a great doctor and surgeon, priest, and a musician. He was born in Alsace in the German empire where he studied theology and became a priest. Later he studied medicine, and together with his wife who was a nurse, they built a hospital in Lambarene. As gifted musician, Schweitzer performed several organ concerts in Europe, the proceeds was used to finance his hospital in Gabon.

Only those who respect the personality of others can be of real use to them.

The Full Measure of a man is not to be found in the man himself, but in the colors and textures that come alive in others because of him.

The doctor of the future will be oneself.

The demands of Jesus are difficult because they require us to do something extraordinary. At the same time He asks us to regard these [acts of goodness] as something usual, ordinary.

The African is my brother but he is my younger brother by several centuries.

Success is not the key to happiness. Happiness is the key to success. If you love what you are doing, you will be successful.

Sometimes our light goes out, but is blown again into instant flame by an encounter with another human being.

Soldiers' graves are the greatest preachers of peace.

Serious illness doesn't bother me for long because I am too inhospitable a host.

Seek always to do some good, somewhere... Even if it's a little thing, so something for those that need help, something for which you get no pay but the privilege of doing it.

The greatest discovery of any generation is that human beings can alter their lives by altering the attitudes of their minds.

One who gains strength by overcoming obstacles possesses the only strength which can overcome adversity.

O heavenly Father, protect and bless all things that have breath: guard them from all evil and let them sleep in peace.

No ray of sunshine is ever lost but the green that it awakens takes time to sprout, and it is not always given the sower to see the harvest.

Never say there is nothing beautiful in the world anymore. There is always something to make you wonder in the shape of a tree, the trembling of a leaf.

My life is my argument.

My life is full of meaning to me.

Man must cease attributing his problems to his environment, and learn again to exercise his will - his personal responsibility in the realm of faith and morals.

Whoever is spared personal pain must feel himself called to help in diminishing the pain of others. We must all carry our share of the misery which lies upon the world.

Wherever a man turns he can find someone who needs him.

We cannot possibly let ourselves get frozen into regarding everyone we do not know as an absolute stranger.

We are all so much together, but we are all dying of loneliness.

Until he extends the circle of his compassion to all living things, man will not himself find peace.