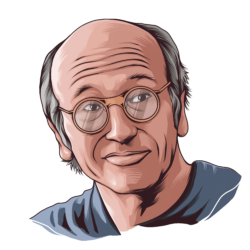 Lawrence Eugene David or Larry David, is an American comedian, actor, writer, director and producer. He studied in the University of Maryland and finished with a degree in History. David’s way to stardom started in New York in mid-1970’s when he performed as a stand-up comedian from which led him to write NBC’s Saturday Night Live show. After a series of short film roles, he and Jerry Seinfeld created one of the most influential sitcoms of all time, Senfield of which he took the role of the head writer and executive producer. David also wrote and directed the movie Sour Grapes and in 1999, he gained another success in HBO special Larry David: Curb Your Enthusiasm.

No, I am a crier and if people ever saw me privately they would be shocked at what a bowl of mush I am underneath it all.

It began to dawn on me that perhaps my country needed me more at home than overseas.

Until I started doing standup, there were some very bleak days.

Every relationship is just so tenuous and precarious.

Even back then, I exuded self-confidence, and that drives women crazy.

I just feed off the energy of the audience.

I just wanted laughs - that's really what I was after.

Most people are completely unaware of their breath. They violate your space, they have no idea that they have halitosis.

Anything that's for free, people will take. They don't discriminate.

You know who wears sunglasses inside? Blind people and assholes.

My life has changed. I'm not walking around any more wishing I wasn't me, which was the case at one time.

And eventually as I kept writing it, something emerged that was not quite me but a version of me.

I was planning on my future as a homeless person. I had a really good spot picked out.

My defensiveness in life really helps me as a driver.