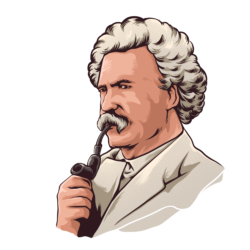 Samuel Langhorne Clemens or known for his pen name Mark Twain was an American writer who wrote the two popular classic novels: The Adventures of Tom Sawyer and Adventures of Huckleberry Finn. Aside from being a writer, Twain was also a great humorist who was considered the “greatest humorist the United States has ever produced”. With his exceptional talent, he overcame childhood plight to become one of America’s most beloved writers.

A banker is a fellow who lends you his umbrella when the sun is shining, but wants it back the minute it begins to rain.

Whenever you find yourself on the side of the majority, it is time to pause and reflect.

Never tell the truth to people who are not worthy of it.

The best way to cheer yourself up is to try to cheer somebody else up.

Clothes make the man. Naked people have little or no influence on society.

Out of all the things I have lost, I miss my mind the most.

Action speaks louder than words but not nearly as often.

Keep away from people who try to belittle your ambitions. Small people always do that, but the really great make you feel that you, too, can become great.

Do the right thing. It will gratify some people and astonish the rest.

Good friends, good books and a sleepy conscience: this is the ideal life.

When you fish for love, bait with your heart, not your brain.

I do not fear death. I had been dead for billions and billions of years before I was born, and had not suffered the slightest inconvenience from it.

The man who is a pessimist before 48 knows too much; if he is an optimist after it, he knows too little.

When angry, count to four; when very angry, swear.

I have never taken any exercise, except sleeping and resting, and I never intend to take any.

The fear of death follows from the fear of life. A man who lives fully is prepared to die at any time.

Books are for people who wish they were somewhere else.

Golf is a good walk spoiled.

When we remember we are all mad, the mysteries disappear and life stands explained.

Thunder is good, thunder is impressive; but it is lightning that does the work.

The most interesting information comes from children, for they tell all they know and then stop.

Many a small thing has been made large by the right kind of advertising.

Only one thing is impossible for God: To find any sense in any copyright law on the planet.

Forgiveness is the fragrance that the violet sheds on the heel that has crushed it.

Let us endeavor so to live so that when we come to die even the undertaker will be sorry.