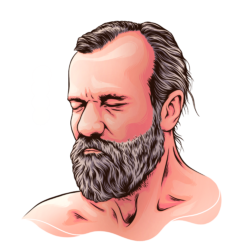 Wim Hof is a Dutch extreme athlete, most known for his ability to withstand prolonged exposure to freezing temperature, thus earning him the nickname “The Iceman”. He has set previously unbeaten Guinness World Records for swimming under ice, prolonged full-body contact with ice, which he has attempted over 16 times with the longest being for 1 hour 42 minutes, and for barefoot half-marathons on ice and snow. The Wim Hof Method that he has developed to undertake such feats include frequent cold exposure, various breathing techniques, yoga and meditation, and he has also claimed that it can safeguard against many medical conditions, though it is yet to be scientifically proven.

I'm not afraid to die. But I'm afraid to not live.

We as a species have unlimited power of our mind. We can make anything happen.

I feel like I can control my own body as if I have a thermostat that I can adjust when I need to.

I am a man on a mission.

In the cold I centre myself and my breathing to transfer all my heat into the centre of my body.

Anybody is able to doubt me. I say, 'Come with your criticism to polish the diamond of the truth.' People need to wake up to their own power. Everybody has this nature.

When I am performing ice immersion, actually I do not think very much. It is all before.

I found by deeper breathing, going into the cold, thinking about it, dealing with it; getting the conviction that my ability to breathe deeper is making connections with my body.

Knowing that you are capable of overcoming hesitation, can be a powerful tool.

It's a great honour to have the nickname of Iceman, it makes me feel very proud of my achievements.

Arthritis, Crohn's disease, psoriasis, depression - all of those diseases are a result of our neglected biochemistry. We need to be stimulated to help fight disease. Cold is a great stimulator.

When there is no oxygen the muscles become acidic and we can't perform any more.

I had a stroll like this in the park with somebody, and I saw the ice and I thought, 'what would happen if I go in there?' I was really attracted to it. I went in, got rid of my clothes. Thirty seconds I was in. Tremendous good feeling when I came out, and since then, I repeated it every day.

Life is like a river. The way of life is to flow with the current. To turn against it takes effort but the current will carry you if you let it. Float with joy and ease.

I've done about anything I can fantasize about in the cold.

As one can solve maths by concentrating do I focus on certain places in my body and generate heat because of it.

With work and life, your true depth can become an alien thing to you. Your gut feelings, your instincts become buried. Men need to laugh more.

I had to find the interconnection of my brain together with my physiology.

Nature has got it; let us retrieve it.

Nature is so merciless - but so righteous.

Breathing and using cold, through cold showers and experiences, provides a boost of performance compared to anything that would be possible if the person had not done that.

Yes, my teacher is the cold.

Nature is a playground where our inner child can roam around.