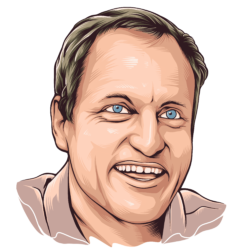 Woody Harrelson is an animal rights activist and an American actor known for his role in the TV series Cheers in 1985 and HBO’s True Detective in 2014. His cunning performance in the show Cheers earned him five Emmy Nominations and an Outstanding Supporting Actor in a Comedy Series award. Harrelson entered the film industry and made an impressive portrayal of Haymitch Abernathy, mentor of Katniss and one of the previous victors in the Hunger Games film in 2012. He also appeared in other films such as Natural Born Killers, The Thin Red Line, and No Country for Old Men.

I used to have terrible acne on my face: red, splotchy discoloration. And mucus - I was constantly blowing my nose. Then one day, this woman sits down next to me on a bus, and says, 'You're lactose-intolerant.' It all cleared up in three days. That changed my life. Doctors couldn't figure it out.

Since half of all trees cut go to making paper, the only meaningful way to address destruction of our forest is to change the way paper is made.

I have a strong spiritual life. I can't say that I have faith that Jesus is my Savior, but I look at Jesus in the same way that I look at, you know, Mohammed. He was giving everyone the goods. So was Gandhi.

Everything I do, I try to think, 'Okay, what are the ramifications?' Like, with the clothes I wear, I prefer if it's grown organically, because cotton - which is what's used in most clothing - takes up 50 percent of all pesticide use.

It's really been a long-term dream of mine to have an alternative to wood-based paper. Over half of the trees cut in the world are cut for paper products.

I think, on a personal level, everybody, when you go through the checkout line after you get your groceries and they say, 'Paper or plastic?' We should be saying, 'Neither one.' We should have our own cloth bags.

I think I've been an incredible example to my kids of what not to do.

I try not to spend too much time with regret, although I wish I'd had more hang time with my dad.

I try to apply the organic concept to my clothes and bedding as well. There's nothing like swimming in organic cotton sheets.

I do sometimes lecture people about what they're eating, but that's only if they ask me.

I think I'm probably a better sport. You tend to really just freak when you lose. You have a real hard time with it.

I remember my daughter Deni coming along, and she was so pure and caring of everybody and everything. And somehow, this little being managed to get around all the obstacles - the gun turrets, the walls, the moats, the sentries - that were wrapped around my heart. My heart at that time needed her.

If we're living in a free country,we should be free to do what we want to do if we're not hurting anyone else or their property. Why should I be incarcerated if I'm doing something that doesn't hurt anyone else?

There are a helluva lot more of us who care about our environment in the world than we realize. We're the majority, and we can do something about that.

The only way to get a serious message across is through comedy.

I think the world's still gonna be here in another 10, 20 years. But I'm not feeling great about things ecologically.

I'm not a time person. A watch is not good for me.

It's the best thing going, parenthood.

I've been vegan for about 10 and a half years. It's been all good. I'm obviously much healthier.

Ive always believed the road of excess leads to the palace of wisdom.

I admire people who just speak the truth.

A moment of realization is worth a thousand prayers.

You know you are in love when the two of you can go grocery shopping together.