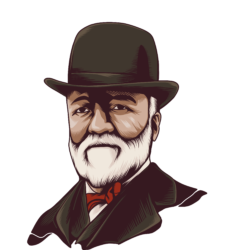 Every man gravitates to where he belongs in life, just as surely as water seeks and finds its level. His position is measured precisely by the quality and quantity of the service he renders, plus the mental attitude with which he relates himself to other people.

There is a power under your control that is greater than poverty, greater than the lack of education, greater than all your fears and superstitions combined. It is the power to take possession of your own mind and direct it to whatever ends you may desire.

The secret of success lies not in doing your own work, but in recognizing the right man to do it.

The rare individuals who unselfishly try to serve others have an enormous advantage-they have little competition.

The older I get the less I listen to what people say and the more I look at what they do.

The more difficult a problem becomes, the more interesting it is.

The greatest astonishment of my life was the discovery that the man who does the work is not the man who gets rich.

The best time to expand is when no one else dares to take risks.

No man will make a great leader who wants to do it all himself, or get all the credit for doing it.

It marks a big step in your development when you come to realize that other people can help you do a better job than you could do alone.

I wish to have as my epitaph: Here lies a man who was wise enough to bring into his service men who knew more than he.

Here is the prime condition of success: Concentrate your energy, thought and capital exclusively upon the business in which you are engaged. Having begun on one line, resolve to fight it out on that line, to lead in it, adopt every improvement, have the best machinery, and know the most about it.

The first man gets the oyster, the second gets the shell.

People rarely succeed unless they have fun in what they are doing.

Aim for the highest.

A library outranks any other one thing a community can do to benefit its people. It is a never failing spring in the desert.

No man can become rich without himself enriching others.

All achievements, all earned riches have their beginning in an idea.

People who are unable to motivate themselves must be content with mediocrity, no matter how impressive their other talents.

A sunny disposition is worth more than fortune. Young people should know that it can be cultivated; that the mind, like the body can be moved for the shade into sunshine.

A business is seldom if ever built up except on lines of strictest integrity.

I am no longer cursed by poverty because I took possession of my own mind, and that mind has yielded me every material thing I want, and much more than I need. But this power of mind is a universal one, available to the humblest person as it is to the greatest.