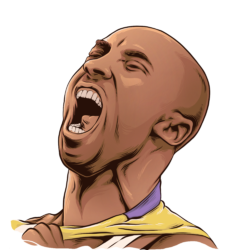 Kobe Bryant, also known by his nickname “Black Mamba”, was a legendary American professional basketball player who spent his entire 20-years career with the L.A. Lakers of the National Basketball Association (NBA), where he won five NBA Championships, was an 18-time All-Star, a 15-time member of the All-NBA Team, a 12-time member of the All-Defensive Team, the 2008 NBA Most Valuable Player (MVP), and a two-time NBA Finals MVP, and he is regarded as one of the greatest basketball players of all time. He also participated in the 2008 and 2012 Summer Olympics as a part of the U.S. National Teams and won a gold medal in each. He also has won the Academy Award for the Best Animated Short Film for “Dear Basketball” in 2018. In 2020 he died in a tragic helicopter accident along with 8 others, including his daughter. The All-Star MVP Award has been renamed in his honor.

The most important thing is to try and inspire people so that they can be great at whatever they want to do.

My parents are my backbone. Still are. They're the only group that will support you if you score zero or you score 40.

Not even in my dreams. That was something that just happened. It's tough to explain. It's just one of those things.

Once you know what failure feels like, determination chases success.

The beauty in being blessed with talent is rising above doubters to create a beautiful moment.

The beauty of coaching is growing the players from the ground up. That journey continues.

The important thing is that your teammates have to know you're pulling for them and you really want them to be successful.

The last time I was intimidated was when I was 6 years old in karate class. I was an orange belt and the instructor ordered me to fight a black belt who was a couple years older and a lot bigger. I was scared s--less. I mean, I was terrified and he kicked my ass. But then I realized he didn't kick my ass as bad as I thought he was going to and that there was nothing really to be afraid of. That was around the time I realized that intimidation didn't really exist if you're in the right frame of mind.

The message was that if you want to win championships, you have to let people focus on what they do best while you focus on what you do best. For me, that was rebounding, running the floor, and blocking shots.

Love that kids are building confidence on and off the court and unlocking their potential through sport.

There's a big misconception where people thinking winning or success comes from everybody putting their arms around each other and singing kumbaya and patting them on the back when they mess up, and that's just not reality. If you are going to be a leader, you are not going to please everybody. You have to hold people accountable. Even if you have that moment of being uncomfortable.

There's been a lot of talk of me being a one-man show but that's simply not the case. We win games when I score 40 points and we've won when I score 10.

There's nothing truly to be afraid of, when you think about it ... Because I've failed before, and I woke up the next morning, and I'm OK. People say bad things about you in the paper on Monday, and then on Wednesday, you're the greatest thing since sliced bread. I've seen that cycle, so why would I be nervous about it happening?

This is the moment I accept the most challenging times will always be behind me and in front of me.

Use your success, wealth, and influence to put them in the best position to realize their own dreams and find their true purpose.

When you make a choice and say, 'Come hell or high water, I am going to be this,' then you should not be surprised when you are that. It should not be something that is intoxicating or out of character because you have seen this moment for so long that ... when that moment comes, of course it is here because it has been here the whole time, because it has been [in your mind] the whole time.

I have self-doubt. I have insecurity. I have fear of failure. I have nights when I show up at the arena and I'm like, 'My back hurts, my feet hurt, my knees hurt. I don't have it. I just want to chill.' We all have self-doubt. You don't deny it, but you also don't capitulate to it. You embrace it.

From the beginning, I wanted to be the best. I had a constant craving, a yearning, to improve and be the best.

Great things come from hard work and perseverance. No excuses.

Haters are a good problem to have. Nobody hates the good ones. They hate the great ones.