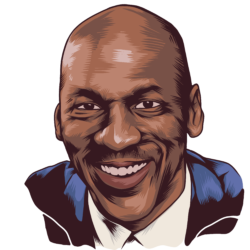 Everybody knows him as the greatest basketball player of all time who brought the Chicago Bulls to six NBA championships and had garnered the Most Valuable Player Award five times. This basketball legend has shown dominance in sports when he was in his younger years. He always aimed to win every game he played. Jordan’s father had introduced him to basketball and built a court in their backyard. During college days, Jordan became an important player in the University of North Carolina at Chapel Hill’s basketball team. He earned the NCAA College Player of the Year in 1983 and in 1984. His love for basketball made him quit college to join the NBA. But he came back to school year after and finished a bachelor's degree in geography.

To learn to succeed, you must first learn to fail.

If you accept the expectations of others, especially negative ones, then you never will change the outcome.

The key to success is failure.

My attitude is that if you push me towards something that you think is a weakness, then I will turn that perceived weakness into a strength.

If you quit once it becomes a habit. Never quit!

If you do the work you get rewarded. There are no shortcuts in life.

I realized that if I was going to achieve anything in life I had to be aggressive. I had to get out there and go for it.

Never say never, because limits, like fears, are often just an illusion.

Heart is what separates the good from the great.

Once I made a decision, I never thought about it again.

You have competition every day because you set such high standards for yourself that you have to go out every day and live up to that.

Failure is acceptable. but not trying is a whole different ball park.

You must expect great things of yourself before you can do them.

I play to win, whether during practice or a real game.

You have to expect things of yourself before you can do them.

The best come from the worst.

Everybody has talent, but ability takes hard work.

Every time I feel tired while I am exercising and training, I close my eyes to see that picture, to see that list with my name. This usually motivates me to work again.

I know fear is an obstacle for some people, but it is an illusion to me. Failure always made me try harder the next time.

The game is my wife. It demands loyalty and responsibility, and it gives me back fulfillment and peace.