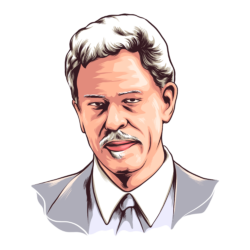 Philip Douglas Jackson is a former American professional basketball player and coach. Employing his new coaching style and strategies, he brought his team to 11 National Basketball Association (NBA) championships. Jackson is the son of Pentecostal ministers who followed and practiced the strict religious lifestyle giving their son no choice but to indulge in sports so he could explore the world outside their circle. He became an asset to his high school basketball team and later on joined the University of North Dakota team.

You can't force your will on people. If you want them to act differently, you need to inspire them to change themselves.

Always keep an open mind and a compassionate heart.

You're only a success for the moment that you complete a successful act.

Wisdom is always an overmatch for strength.

When the mind is allowed to relax, inspiration often follows.

The sign of a great player is how much he elevates his colleagues' performance.

The real value in everything you do is in the details.

The most we can hope for is to create the best possible conditions for success, then let go of the outcome. The ride is a lot more fun that way.

No one plays this or any game perfectly. It's the guy who recovers from his mistakes who wins.

Leadership is not about forcing your will on others. It's about mastering the art of letting go.

Before a vision (dream) can become a reality, it must be owned by every member of the group.

I think the most rewarding part of the job, and I think most coaches would say it, is practice. If you have it, a very good practice in which you have 12 guys participate, and they can really get something out of it, lose themselves in practice.

Good teams become great ones when the members trust each other enough to surrender the Me for the We.

Once you've done the mental work, there comes a point you have to throw yourself into the action and put your heart on the line. That means not only being brave, but being compassionate towards yourself, your teammates and your opponents.

Approach the game with no preset agendas and you'll probably come away surprised at your overall efforts.

You have to be able to psychologically help your players, support-wise, be in touch with them, so I think managing people is very important.

Basketball is a simple game. Your goal is penetration, get the ball close to the basket, and there are three ways to do that. Pass, dribble and offensive rebound.

Coaching is about, "How do I get people to play at their peak level?" It is a spiritual quest. And if it's not that, you don't have a challenge, you don't have a mission. Forming a brotherhood and trying to move it forward - that's what coaching is.

When I was young, I was dedicated to become a minister - my brothers and I were formally brought in front of the congregation in a dedication ceremony, where we were dedicated to the future service of God.

We're not even going to discuss it. It's a basketball team and we've got to focus on what we need to do.

There's a lot of chatter in basketball and, rightfully, you want players to be talking to each other... But sometimes in practice, it gets too verbose... so I tried to take things out of the ordinary and make them special so they'd understand the difference.

The two teams were both tired, but we were able to ride a little energy in the second half. We were able to build a lead that was tough to overcome.