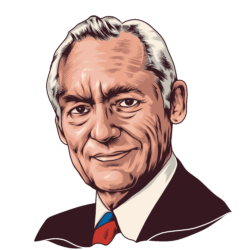 Known as the Bargain Basement Billionaire, Samuel Moore Walton single-handedly built Walt Mart into one of the biggest retailer stores in the world shaping up America’s shopping experience. Walton started his journey when he took a sales trainee job at the JC Penney store in Iowa. His work experience made him realize how customers should be treated right. After his successful business venture with a Ben Franklin variety store and lost its lease, Walton decided to put up a shop in a store in Bentonville, Arkansas. With his talent in handling a business, he managed to open his first Wal-Mart in Rogers, Arkansas. The retail store was a big hit to the customers, and through time, with careful decisions and plans, it became the nation’s biggest retailer.

Appreciate everything your associates do for the business.

Loosen up, and everybody around you will loosen up.

High expectations are the key to everything.

Great ideas come from everywhere if you just listen and look for them. You never know who's going to have a great idea.

Most everything I've done I've copied from somebody else.

I believe in always having goals, and always setting them high.

Commit to your business. Believe in it more than anybody else.

Communicate everything you can to your associates. The more they know, the more they care. Once they care, there is no stopping them.

The key to success is to get out into the store and listen to what the associates have to say. It's terribly important for everyone to get involved. Our best ideas come from clerks and stockboys.

Celebrate your successes. Find some humor in your failures.

Swim upstream. Go the other way. Ignore the conventional wisdom. If everybody else is doing it one way, there's a good chance you can find your niche by going in exactly the opposite direction. But be prepared for a lot of folks to wave you down and tell you you're headed the wrong way. I guess in all my years, what I heard more often than anything was: a town of less than 50,000 population cannot support a discount store for very long.

Leaders must always put their people before themselves. If you do that, your business will take care of itself.

Celebrate your success and find humor in your failures. Don't take yourself so seriously. Loosen up and everyone around you will loosen up. Have fun and always show enthusiasm. When all else fails, put on a costume and sing a silly song.

I learned early on that one of the secrets to campus leadership was the simplest thing of all: speak to people coming down the sidewalk before they speak to you. I did that in college. I did it when I carried my papers. I would always look ahead and speak to the person coming toward me. If I knew them, I would call them by name, but even if I didn't I would still speak to them. Before long, I probably knew more students than anybody in the university, and they recognized me and considered me their friend.

Keep everybody guessing as to what your next trick is going to be. Don't become too predictable.

We let folks know we're interested in them and that they're vital to us. cause they are.

It was almost as if I had a right to win. Thinking like that often seems to turn into sort of a self-fulfilling prophecy.

There are only four things in life that matter. The first is happiness and I'll sell you the other three for a dollar.

Job security lasts only as long as the customer is satisfied. Nobody owes anybody else a living.

Control your expenses better than your competition. This is where you can always find the competitive advantage.

I pay low wages. I can take advantage of that. We're going to be successful, but the basis is a very low-wage, low-benefit model of employment.

If I had to single out one element in my life that has made a difference for me, it would be a passion to compete.